” I think of myself as a workaholic during the week and a hippie on the weekends,” says Isabel Marant, dismantling a cigarette to make a roll-up. Even under the glass atrium of her Parisian studio, surrounded by stark white walls and diligent staff typing in silence, Marant, sitting cross-legged on a school chair, brings an air of the bohemian to the corporate space. But then it is Friday, and soon she will leave for the weekly trip she makes with her nine-year-old son Tal and handbag-designer husband, Jérôme Dreyfuss, to their no-frills countryside cabin outside the city.

MY FAVORITE FOOTWEAR: Always flats when I am working so I can run around. I have four pairs of my favorite black suede boots

MY FAIL-SAFE PIECES: I wear my own label all the time, new-season pieces mixed with old favorites. I never design something I wouldn’t wear myself

“In the week, I have no idea what the weather is like, I don’t care,” she says of her head-down work ethic. “But I need to be surrounded by nature from time to time or I feel suffocated. I want to grab mud and feel the ground beneath my bare feet.” In the cabin’s grounds is a river, in which Marant swims 3km every weekend morning between April and September. “It is like a walk in the forest, but I swim it instead. I empty my head and get clear visions of work.”

In her off-duty wardrobe of shorts and tank tops (her own label, naturally), all sinewy caramel limbs and bare-faced beauty, Marant has an ‘earth mother’ vibe about her. There are few French runway designers making clothes you feel comfortable wearing while dancing in a field at midnight, but Marant’s are made with a freer lifestyle in mind. Though she didn’t grow up in a free-spirited household – she had a conservative upbringing in the wealthy Paris suburb of Neuilly – Marant began experimenting with her look at the age of nine, rebelling against her peers. “I wasn’t loving myself very much back then. I didn’t think I was pretty so I wanted to hide,” she says, recalling how she copied Patti Smith’s long fringe so no one could see her face. “I wore flares with rotten hems, suede shoes and Laura Ashley long white skirts.”

Her friends, meanwhile, were discovering penny loafers and the bright prints of Fiorucci. “No one was used to seeing kids with their own style, but the prim girls in the chic district admired me because I had the spirit to do what I wanted.” Soon those friends began asking Marant to make clothes for them, too. A designer was born.

Some 35 years later and that unrestricted aesthetic still exists in every piece, from SS13’s studded boots to the paisley tunics with their ’70s vibe. But elements of those young insecurities still exist: when Marant slips into a pair of micro shorts for our shoot, she pulls her hair into a bun, saying she hates to look “too feminine”.

These days, her look is made up  of favorite designs of past seasons. Of the varsity emblem sweater she is wearing, she has another 14 at home; 25 pairs of the printed jeans; countless repeats of the faded tee; and four pairs of the flat, black suede boots that she describes as her “nun shoes”.

Nonconformity runs in the Marant family, it seems. Her son,Tal, she says, is a “complete bohemian”, who cries every Sunday when it is time to leave the cabin. “He likes to play with wood, fashioning bows and arrows. He’d happily live in the mountains.” Clearly, there’s a part of his mother that would like to do the same 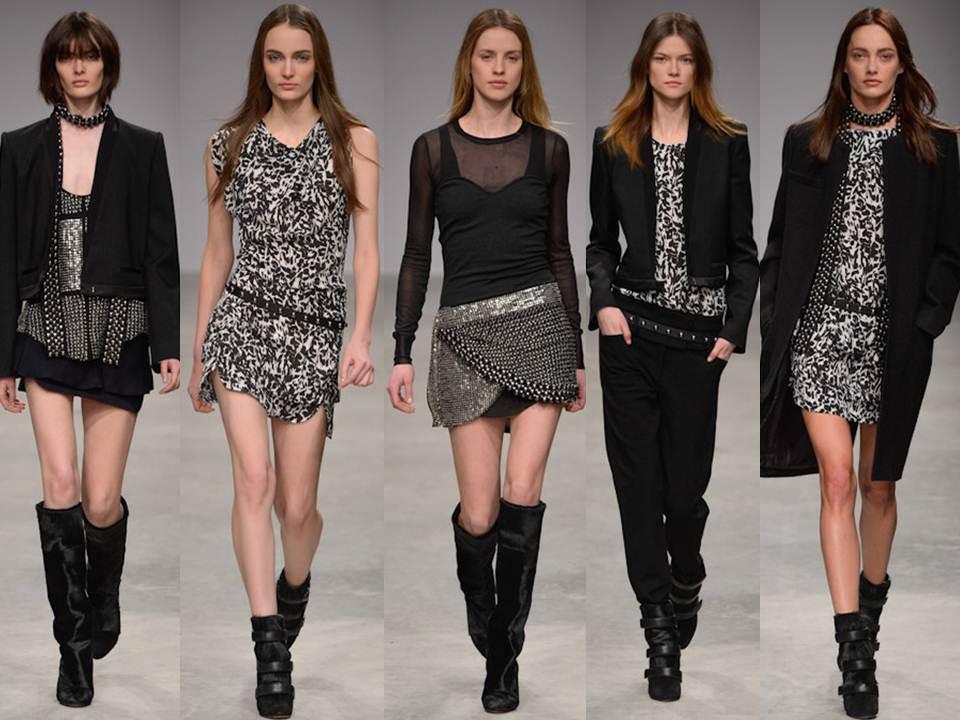